How does a Gonstead chiropractor in Carlsbad view the Ebola happenings in the Congo?

The NYT just announced last week that the Ebola outbreak in the Congo, July 2018, was over in 3 months.  33 people died.

The symptoms from the ebola infection are tremendous, similar to those of any viral infection.  But one that makes Ebola more feared than any other is the hemorrhagic bleeding, from all orafices.  It’s really bad.  Basically the blood vessels get small leaks and you loose blood pressure, body temp drops, and ultimately what kills you, just like anytime anyone dies, is your body can’t create a nerve impulse to keep the organs alive.

Bad science has kept medicine way behind the times.  Recently some researchers admitted that it isn’t ebola that kills you.  It’s actually your immune response that kills you.  In a normal immune response, the virus stimulates a cytokine response which calls for the immune system to start going after the infection.  Here’s the thing.  If this cytokine response is normal, your immune system will take care of the infection, subdue the virus and you’ll recover.  If your immune response is abnormal, the cytokines call out everything they got to go after this infection, and if that happens, not only do they destroy the virus, but they start destroying you, causing major damage to your blood vessels, they start hemorrhaging and you can die.

So what these researchers are saying is that an immune system properly working can defend against the ebloa virus and an immune system not working properly will cause hemorrhaging.  Whether you live or die is dependent on your immune system, not whether you’re infected with the virus.  Because not everyone dies.  Fifty percent will live.

Chirpractors have known this since 1895.  A simple example is what DD used to say, I desired to know why one person was ailing and his associate, eating at the same table, working in the same shop, at the same bench was not.  Why?  What difference was there in these two persons that caused one to have various diseases, while his partner escaped?  DD understood it is the person’s internal resistance that mattered, not the environment.

What controls the immune system?  The nervous system!

AD Speransky the Russian medical doctor attempted to sell this concept in the 1920s and 1930s and he would paralyze a nerve with cocaine before infecting it with a noxious substance, and there were no symptoms.  So paralyzing a nerve killed the response to the noxious substance, and there was no symptom.  If he didn’t paralyze the nerve and treated the nerve with a noxious substance, it would produce a symptom.  For instance, he could put croton oil on a dog’s sciatic nerve and the dog would have a seizure, or go blind, or some symptoms.  So Speransky proved the nervous system controlled the immune response.

The Ebola virus proves what we’ve said all along.  As long as the innate intelligence of the body is not interfered with, the immune system can properly respond to the virus normally, the person heals.

So what can medicine do to make nature work better?  More vaccines, more chemicals?  The only thing science has done, and it’s really the engineers who have done this, is started implementing sanitation processes which is really lacking in 3rd world countries.   Only chiropractic has something to offer here because chiropractic removes the interference to the nerves so the innate intelligence can work normally. Think:  if innate is on the job, what could possibly allow the body to work better?

I wonder how many colds, flus, other infections that have been overcome by chiropractic patients over the years because the nerves were not interfered with and the body was fighting infections properly and symptoms never appeared. Don’t wait for years before getting help and call us today to schedule a consultation with your San Diego Gonstead Chiropractor in Carlsbad. 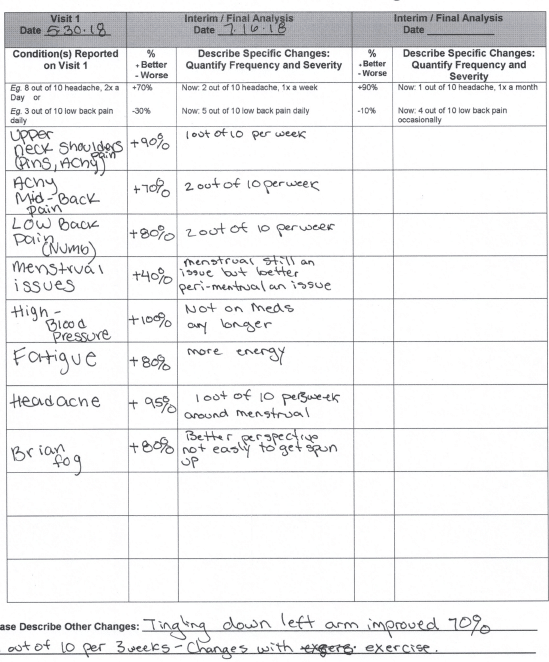 Here’s some more patient success, another high blood pressure case.  Woman in 6 weeks off all blood pressure meds.  When innate is not interfered with due to spinal subluxation, amazing things happen.  Not only that but.

For Educational Purposes Only
No exercises, stretching, or traction is used on any patient. Only specific Gonstead chiropractic adjustments.

Gohl Clinic of Chiropractic in Carlsbad